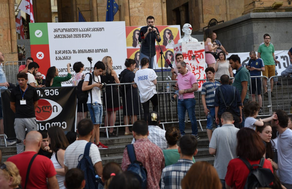 Anti-occupation protest rallies will no longer be held on Rustaveli Avenue. As one of the rally organizers Shota Digmelashvili declared, the large-scale rally planned on Rustaveli Ave on Sept 20 will be the last, with the format being changed in the future. The show called“It’s a Shame” will also be removed from social networks.

As the organizers declared, the Movement will hold meetings in the regions of Georgia in relation to 2020 parliamentary elections. Also, the Movement has held the information campaign in the capital.

The rally organizers will elaborate on the details of the protest action on Sept 20.

Protest rallies were launched on Rustaveli Avenue on June 20 at night. The visit by Sergey Gavrilov, the member of Russia's State Duma, and other members of the delegation was followed by a wave of protests. Russian Gavrilov in the Chairman’s chair of the Parliament of Georgia irritated the citizens.

The demonstration was forcibly dispersed with tens of citizens being injured in the clash with law-enforcers.

The investigation into the case on charges of organizing and participating in group violence was launched soon afterwards. Some protesters have been held in pre-trial detention.

After the developments of June 20-21,  protest rallies have continued. The demonstrators demand the resignation of Giorgi Gakharia, who served as Minister of Internal Affairs during the crackdown on protesters, have remained unmet.