Temperature to reach 42 degrees in Georgia 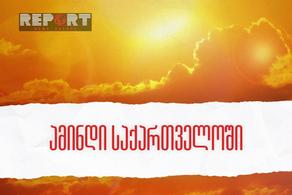 According to the National Environment Agency, the air temperatures will remain high in Georgia until July 9.

According to the weather forecasters, on July 8, from the second half of the day to July 11, the temperature will be relatively cold. It will rain from time to time. It is possible to observe thunderstorms, hail, strong winds, and 2-3 magnitude disturbances at sea in some places.