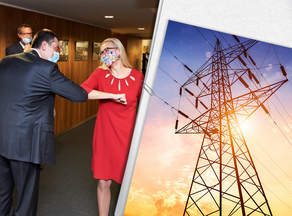 The Prime Minister of Georgia, Giorgi Gakharia, met with the European Commissioner for Energy, Kadri Simson during his official visit to Brussels.

The politicians discussed important issues of the Georgia-EU Strategic Partnership and highlighted the country's progress on the path to European integration.

During the meeting, the Georgian government's effective efforts in combating the COVID-19 pandemic got positively assessed. According to the Prime Minister, despite the increase in cases, Georgia is in full control of the situation.

Particular attention was paid to cooperation in energy and noted that this is the direction that will promote Georgia's physical integration into the European Union. The meeting focused on the important prospects for the implementation of specific energy projects in the future.

According to the head of government, as a member of the European Energy Community, the country's legislation is being brought into line with EU directives.

The Minister of Foreign Affairs Davit Zalkaliani and the Head of the Administration of the Government of Georgia, Natia Mezvrishvili, attended the meeting held at the European Commission.