Trade and economic barriers between Russia and Georgia must be lifted

Trade and economic barriers between Russia and Georgia must be lifted 30 September, 2019  22:08 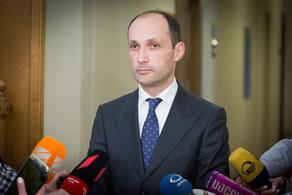 “We are taking advantage of all opportunities, all formats, including the international formats, for the purposes of discussing the crucial issue of the country’s de-occupation, which is on politics' priority list,” declared Minister of Environmental Protection and Agriculture Levan Davitashvili.

The Minister announced that taking effective steps is compulsory and added that resuming flights with Russia will promote economic relationships, and this step is worth welcoming.

He also declared that further trade and economic barriers must be abolished, since this will result in improving economic conditions of the Georgian people.