Venezuela to sell oil and gold in national cryptocurrency

Venezuela to sell oil and gold in national cryptocurrency 3 January, 2020  16:18 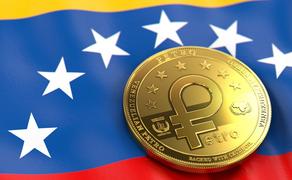 As El National reports, Venezuela will sell the oil and gold in exchange for its national Petro cryptocurrency, the de-facto president of the country, Nicolas Maduro said.

According to him, Venezuela is prosperous, introducing the cryptocurrency in the daily life of its population.

To note, pensioners and public officers received the New Year bonuses in the Petro currency.

The value of Petro depends on the price of every single barrel of oil mined in Venezuela.

''We have already started selling the iron and steel in Petro while, at the same time, we have concluded contracts on the sale of oil, steel, iron, and aluminum. We will also sell a part of our gold in the cryptocurrency,'' Maduro said.

Maduro announced the cryptocurrency creation in October 2017 and launched selling it in February 2018.