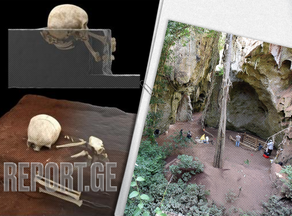 Archaeologists have unearthed a 78,000-year-old human tomb in the Panga ya Saidi cave, Kenya, one of the oldest fossils ever found in Africa. A child between the ages of 2.5 and 3 was buried in the grave, CNN reports.

Analyzing the discovered object, the scientists came to the conclusion that the people of that time already had highly developed social customs and symbolic thinking, and many people took part in the ritual of burying the child.

According to the location of the bones found, it was determined that child was rested carefully in a reclining position on the right side. He had his legs crossed, and they were up to his chest. The remains were wrapped in a special cloth, which might have been animal skins. Scientists also suggest that the child rested his head on a pillow in the grave.

According to María Martinón-Torres, the director at the National Research Center on Human Evolution (CENIEH) in Burgos, Spain, an examination of the tomb reveals that the child was loved, respected, and cared for. It seems that traditions and beliefs in the symbolic world were prevalent among the people of Africa in ancient times.

It is noteworthy that the tombs of Homo sapiens, which are 120,000 years old, have been found in other regions of the world - Europe and Asia. But, the tomb of a child is the oldest among any other archeological sites found in Africa.