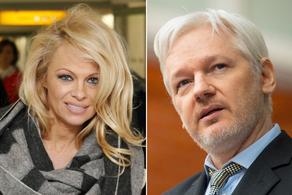 Pamela Anderson is making a last-ditch attempt to snare a presidential pardon for friend and WikiLeaks founder Julian Assange on the eve of a turning point in his espionage case — and she wants her fellow Americans to help, the New York Post reports.

She thinks the US is risking the most basic tenet of democracy by accusing Assange of leaking classified information about the Iraq and Afghanistan wars. And she is speaking out — yet again — before Britain rules Monday on whether to extradite Assange to Washington to face federal charges.

“The case is simply a criminalization of a free press,” Anderson told The Post.

Assange, 49, faces 18 criminal charges tied to the public release of hundreds of thousands of secret papers handed over by already convicted ex-Army intelligence analyst Chelsea Manning. If found guilty, the Australian — awaiting trial in a London prison after being kicked out of his hideout of almost seven years, the Ecuadorian embassy — could spend up to 175 years behind bars.