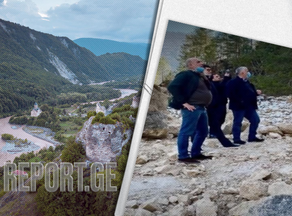 Fifteen families are cut off from the outside world due to the natural disaster in Racha. In the village of Gvardia, Ambrolauri Municipality, due to heavy rainfall, a rock mass collapsed, and the access road to the village got closed entirely.

"15 families are cut off from the outside world, a very large mass of rock collapsed, and the entrance road was completely closed. This stone must be exploded so that the equipment can pass from the top; otherwise, it cannot be approached," said one of the residents of Gvardia.

As the Acting State Representative of Racha-Lechkhumi-Kvemo Svaneti Giorgi Makarashvili stated, to avoid additional danger, road clearing works will be carried out under the supervision and recommendations of geologists.

"There are big stones on the road, and it needs to be cleaned, but because there is still a rocky mass above, it is recommended that the road be cleaned under the supervision of geologists to avoid additional danger. The population is not in any danger; they will be assisted immediately if necessary. Currently, there are about 25 people in the village," Giorgi Makarashvili said.

Landslides intensified due to heavy rainfall near the village of Zeda Ghvardia, Ambrolauri Municipality, caused the collapse of a rock mass yesterday, due to which the access road to the village got closed.