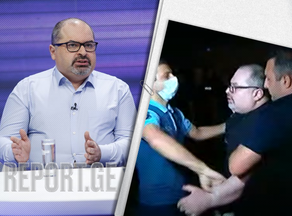 The partner organizations of the Coalition for Media Advocacy consider the arrest of Irakli Absandze as an attempt to intimidate the media and issue a statement.

"According to the spread information, 12 people were detained near the office of "Georgian Dream," including the journalist of the Public Broadcaster Irakli Absandze.

The video shows the journalist is not resisting the police when he is being detained.

It is important that Irakli Absandze has been protesting against the facts of violence against journalists on the social network in recent days and criticizing the government officials.

We call on the Ministry of Internal Affairs of Georgia to refrain from using the mechanism of harassment and intimidation of journalists," the statement said.

The statement is signed by:

Irakli Absandze, a journalist and presenter of the First Channel of Georgia, was administratively detained at a rally near the office of the Georgian Dream and was later released.

According to the Ministry of Internal Affairs, the police detained 12 people during the confrontation.