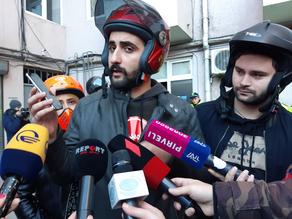 Members of the Dare Movement held a rally in front of Sophio Kiladze’s bureau. Activists were wearing helmets for defense, stating that Georgian Dream supporters are awaiting them everywhere they go.

The protesters wanted to go inside the bureau and meet with Kiladze. Police later allowed the demonstrators to enter the building, but the lawmaker was not there. According to the bureau official, Sophio Kiladze will contact and meet one of the leaders of the Movement.

Activists have several questions to ask, they are wondering why Kiladze is against the proportional electoral system.

According to activists they had 41 silver coins to leave at the bureau if Kiladze refused to meet them.