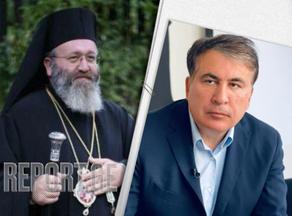 Father Melkisedek said after visiting Georgian ex-president Mikheil Saakashvili in the Rustavi penitentiary establishment that the latter does not intend to end his hunger strike, and he thanks his compatriots for yesterday's rally.

''He thanks entire Georgia, everyone who takes an interest in his health condition. He is thankful for yesterday's action. I want to ask everybody who is authorized to do so to let his doctor in his cell as this is a must.

I asked him to end the hunger strike as his current condition is unacceptable, but he refused to do so,'' father Melkisedek declared.