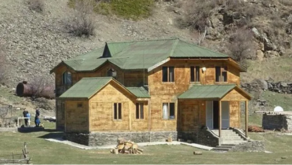 Fire at Shatili School has been extinguished, with no one having been injured. The corresponding statement was spread by Mskheta-Mtianeti Administration State Representative.

"A few hours ago, fire broke out at Shatili Pantheon School. The institution was mainly made of wooden materials, which is why fire proved impossible to extinguish, and the building burnt down completely. Nobody was injured in the accident, with students and personnel having been evacuated on time. Fire has been extinguished. Groups of firefighters and rescuers at The Emergency Management Agency of the Ministry of Internal Affairs of Georgia and Mskheta-Mtianeti Administration State Representative, together with the local self-government, have been involved in the situation regulation process. The cause of the fire will be determined in the course of the investigation. It is noteworthy that the school was fully rehabilitated in summer of the current year," reads the statement.

Fire broke out at Shatili school at 17:00. The school was built by financial assistance of German donors, with eight students being registered there at this point.

According to the PM's decision, a new school will be constructed in Shatili.