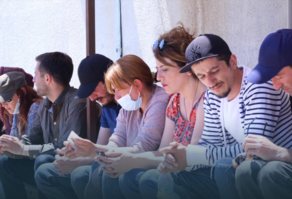 Residents of Shukruti village in Georgia's Chiatura municipality have reportedly ended a hunger strike after they had reached an agreement with Georgian Manganese LLC.

At the company's request, no further details are allowed to be publicized.

Residents of Shukruti village have rallied for more than 100 days. In their words, Georgian Manganese's activities in the village have inflicted damage on it, their houses, and the village's entire ground surface.

On 30 May, locals arrived in Tbilisi to protest outside the U.S. Embassy. They say that ambassador Degnan showed interest in their problems and promised to act as a mediator.

As protesters were rallying in Tbilisi on May 31, Nikoloz Chikovani, who presides over the Georgian Manganese LLC, held a briefing at which he said that after the Samkharauli Bureau assesses the existing situation in the village, the company will reimburse locals' losses.