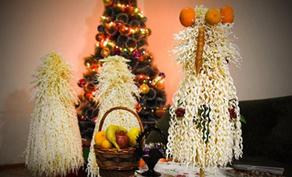 The Kalanda Festival -- a traditional Gurian New Year -- is celebrated in Georgia today, on 14th of January.

The Greek word Kalanda (carols), derives from the Latin calendae, which means the first day of the month. No one knows why residents of the Guria region call the festival Kalanda. However, New Year here is celebrated later than throughout the world.

Locals invite first-foots to their houses and set out to first-foot their neighbors too. Traditionally, Saint Basil is considered the first-foot in the region. To honor him, people here decorate the Chichilaki (Gurian alternative of the Christmas tree). The Chichilaki is white resembling Saint Basil's beard.