Khvicha Mghebrishvili: What bats and laboratory are we talking about, this is insane

Khvicha Mghebrishvili: What bats and laboratory are we talking about, 25 September, 2020  19:11 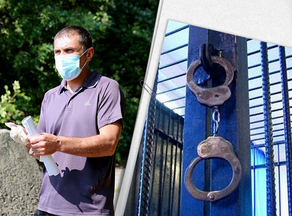 Khvicha Mghebrishvili, who was released after illegal detention, made the first comment.

He said talks about bats and labs are nonsense.

"I was going to Artsev, they were listening to me on the phone, and waiting for in 100 meters. They caught me before I entered and took me to Tskhinvali. I was treated well there. I had no problem. The issue about the bats is nonsense. They talked about a laboratory, but I do not know English well, so it was hard for me to understand. They mentioned Americans, but it made no sense to me. I saw Georgians, they are fine and are waiting for the release," Khvicha Mghebrishvili said.

Mghebrishvili crossed the so-called border today and is currently on the territory controlled by Georgia.