MIA: Water cannon was not aimed at journalists 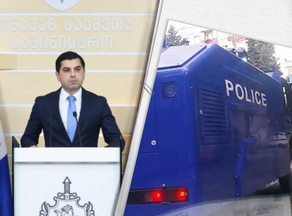 "The water cannon was not used against the media representatives," the Deputy Minister of Internal Affairs Kakha Sabanadze stated at the briefing today.

According to Sabanadze, water cannons were used only against those who used violence against police officers.

"The water cannon was used in the direction where there was a threat to public order and safety. Believe me; it was difficult to determine where the media representative was standing during the rally; however, no water cannon was aimed on purpose. Water cannons were used against rally participants who used violence against police officers and tried to enter the CEC building illegally. We used proportional force," Kakha Sabanadze said.