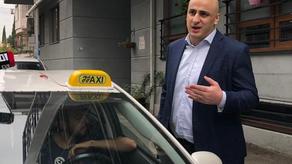 Nika Melia, the Leaders of the National Movement arrived in court with Shmaxi. According to the Deputy he tries to promote the new way of transportation.

The first court hearing of Nika Melia, a member of the United National Movement is being held at the City Court regarding the June 20 events.

Nika Melia is accused of inciting and organizing mass violence, or participating in it during the June 20-21 rally. According to the Court decision Melia is not allowed to leave his place of residence without the permission of the Prosecutor's Office. This restriction affected his parliamentary work as well. The Prosecutor's Office was ordered to carry out electronic monitoring of Nika Melia and he is wearing the bracelet.