PM of India: Thanks to Goa for keeping the relics of Queen Ketevan 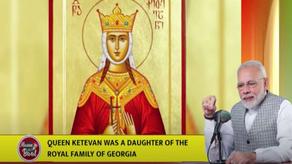 The Prime Minister of India, Narendra Modi, paid tribute to the memory of the Holy Queen of Georgia, Ketevan, during the monthly program, "Mann Ki Baat," and noted how "extremely emotional" the people of the country are towards her, the Indian edition Daily News and Analysis write.

The publication notes that the Indian Foreign Minister visited Georgia and handed over parts of St. Ketevan, which was martyred in Iran in 1624.

The Prime Minister recalled the event of the transfer of the relics as "very interesting and emotional" and noted that "this gives friendship between India and Georgia new strength" and "the words spoken in honor of India at the ceremony are memorable."

The ceremony, which was held at the Holy Trinity Cathedral, was attended by Georgia's highest political and religious leaders; among them were the President, the Prime Minister, and the Catholicos-Patriarch of All Georgia, and the spiritual leader of the Georgian Orthodox Church, Ilia II.