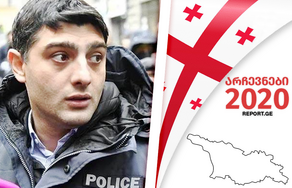 Following Vazha Siradze, Director of the Georgian Interior Ministry's patrol police department, shooting in the capital district of Gldani has not been confirmed yet.

"An incident occurred, as parties confronted each other. We detained five for disobeying the police and hooliganism. We cannot confirm the shooting yet; we are studying the situation," Vazha Siradze said.

Today, in Tbilisi's Gldani district, voters physically humiliated each other near the 179th polling station.