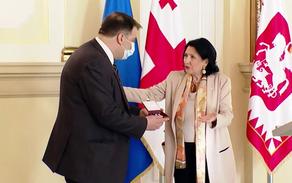 Georgian President Salome Zurabishvili has given a medal of honor to Levan Taktakishvili, Director of the Department of Library Resources of the Georgian Parliament’s National Library.

Taktakishvili received the medal for his contribution to the construction of Georgia’s state and honorable service.

She noted that today, immigrants’ creatures are largely available in the National Library due to Levan Taktakishvili.

“I hope that we will succeed in opening an immigration museum,’’ Zurabishvili claimed.