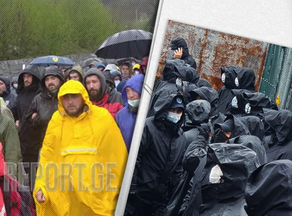 Tensions were high near the Enka company in the Rioni gorge, with Rioni gorge guards having blocked the road and prevented a company car driver from driving any further.

After tensions and confrontation, the car was sent back.

Activists say they tried to stage a peaceful demonstration and block the road, but provocateurs whipped up tensions.

Rioni guards made a corridor on the road, which is set to be used by people heading to Gumati village. Activist Varlam Goletiani said they do not plan to end protests.