Search operation for eight people in the ruins 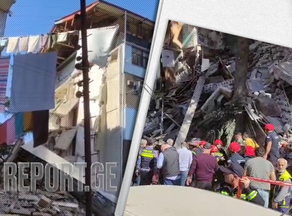 Acting Batumi Mayor Lela Surmanidze told report.ge that eight people may have been at home when the building collapsed on May 26 Street.

"The manager of our service center and the chairperson of the partnership report about 7-8 people in the rubble. There is one lying woman who may have been at home. Part of the kids are at school, part of the people are at work. Twelve family houses have collapsed, eight people are probably in ruins," says Lela Surmanidze.