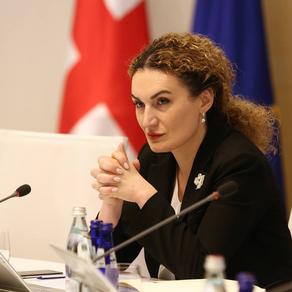 The State Minister for Reconciliation and Civil Equality, Ketevan Tsikhelashvili, congratulates the society with the Abkhaz Language Day.

“The Abkhaz language is protected by the Georgian Constitution which justifies the importance of this language for all our society.Today this language requires particular care, protection and development due to the developments in the occupied territories”, the statement reads.

According to the State Minister, the government undertakes corresponding steps in the framework of the state program of 2017 related to the Abkhaz language.

“I am glad that more and more young people are interested in studying Abkhaz language.There are much more things that unite Georgian and Abkhazian societies than those that separate us.The native language is important for identity and we have to be united in our effort to maintain and develop it. Having this urge, we have to forget the hard and painful experience of the past and through cooperation and reconciliation try to overcome the barbed-wires that separate us today for the best future of our children.”, writes Ketevan Tsikhelashvili in social net.

Georgia started celebration of Abkhazian Language Day since 2007.Abkhazian language writing was created in 1928.Initially it was Latin alphabet and later Georgian alphabet used.Starting from 1954 Abkhazian writing is using Cyrillic.