Turkish Ambassador meets participants of the journalism course in Marneuli 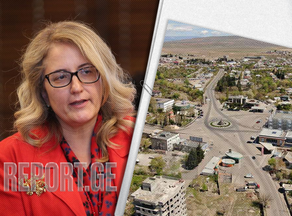 The Ambassador Extraordinary and Plenipotentiary of Turkey to Georgia, Fatma Seren Yazgan, held a seminar meeting for the participants of the journalism course organized by Aktual.ge at the Ata Holding building in Marneuli.

The diplomat visited the GAIM exhibition with the organizer of the course, Ilkin Huseynov, the director-general of the "Aktual Media" on the occasion of the Day of Remembrance of Azerbaijan on September 27, where they commemorated the war victims and paid tribute to their souls.

The Director-General of the media outlet thanked the Ambassador of Turkey for the meeting with the participants.

Before the seminar, Ilkin Huseynov spoke about the 28th anniversary of the fall of occupied Georgia, Sokhumi, on September 27 and paid tribute to those killed during the Abkhaz war, as well as soldiers and officers who fought heroically for the country's territorial integrity. They observed a minute of silence for those killed in the war.

At the seminar, Fatma Seren Yazgan got acquainted with the young people and spoke about the development of Turkey-Georgia, as well as Azerbaijan-Georgia-Turkey relations.

The Turkish Ambassador spoke to the students about international relations, foreign policy, political, economic, and humanitarian issues and stressed the importance of the media.

The Ambassador also drew attention to the misinformation spread in the Turkish and Azerbaijani media:

"We all remember the period last year when lies and misinformation were spread in the media. It continues today. During the war last year, misinformation was spread in various foreign media outlets, as if Azerbaijan was fighting not on its own but on the territory of another country. Turkey is still subject to a lot of false information. A journalist should not cover false news. We have recently seen a lot of media representatives in Turkey publishing false news in the name of liberalism," the Ambassador said.

The seminar was attended by the staff of the news portal, Aktual.ge, as well as one of the trainers of the course, Jeyhun Muhammad Ali.