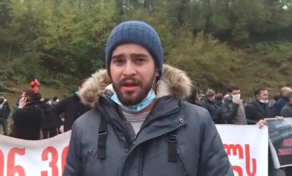 Rioni gorge guard Varlam Goletiani says that at the action rally they have organized, representatives of conflicting parties tend to gather.

Rally organizer Goletiani claims clashes are in the government's interests, and they have already warned the police concerning clashes likely to break out there.

''In order to prevent and avoid crashes, we state that we distance ourselves from the process as we are participants of the peaceful rally. If conflicting parties arrive at the rally site and confront each other or the police, we will head for the area where we have tents. We distance ourselves from everyone who will try to drag peaceful protests through the mud,'' Mr. Goletiani declared.

Georgian March members have also arrived at the rally site in the Gumati village.