What does video footage in Basilashvili's case show? 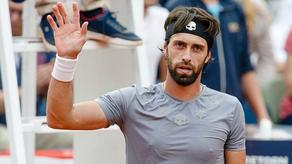 Video footage showing that the woman was not subjected to violence has been retrieved, Basilashvili's lawyer Irma Chkadua said, adding that no evidence incriminating Basilashvili has emerged in the case so far. In the lawyer's words, the trend in Georgia that the woman's allegation only that she is the victim of violence is enough to believe her is extremely bad.

"It goes without saying that victims should protect themselves; however, the footage presented at court fails to incriminate Basilashvili as it does not show any violence," Basilashvili's lawyer said, adding that his client is far from being an assaulter, and this status quo for him is tragic.

Basilashvili, ranked 27th in the world and first in Georgia, was charged with assaulting his wife and was apprehended before his child.

Tbilisi City Court approved the defendant's motion and released him on GEL 100,000 bail.

Nikoloz Basilashvili issued a public apology after the incident.