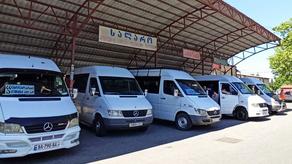 The officers of Tbilisi Police Department of the Ministry of Internal Affairs detained three persons: M.R., born in 1971, L.A., born in 1968 and K.D., born in 1973, as a result of operative-investigative measures on charges of membership of a gang and extortion. The press service of the agency informed report.ge about the incident.

"The investigation established that the so-called criminal authorities L.A., K.D. and M.R. in Tbilisi, terrorized self-employed citizens in the Okriba bus station, who were transporting passengers in their cars. Through threats of physical retribution, they received a certain amount of money every month from the drivers.

The investigation launched under Article 223, Part 1 of the Criminal Code of Georgia and Article 181, Part 2, Subparagraph "a," said the statement.

The offense carries a maximum sentence of 7 to 10 years in prison.