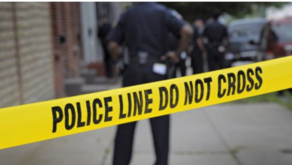 A police officer from the city of Chkhorotsku, accused of raping a young man has been arrested. According to the General Prosecutor's Office, the accused was detained on December 5 on the basis of a court ruling.

He will be charged within the timeframe provided by law.

According to the Prosecutor's Office, the investigation is in progress under the first part of article 137 of the Criminal Code of Georgia, a rape case.

The crime is punishable by imprisonment for the term of 6 to 8 years.