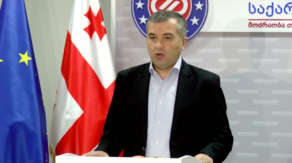 “The government is taking half-billion internal loan” – the Leader of European Georgia announced during media briefing.

The initiative regarding 2019 budget amendment was submitted to the Parliament. European Georgia will not support the initiative.

“These changes are symbolic, showing the real situation in the country.The Government is cheating the population.We remember the Prime Minister’s speech in the Parliament when he said that the depreciation of GEL is related to the fact that the government does not take loans. By implementing of the initiated change the government is taking additional 500 million of internal loan.The internal loan taken during the current year mounted up 900 million.The state had never ever in its history had such loan.It is the loan that we and our children will have to pay.It is the money at the expense of which the government is implementing the changes.We consider the volumes of internal and external loans alarming. Another reason that we will not support the initiative is that it demonstrates the managerial inability that the current government is characterized by.The government that failed to manage the preferential credit due to lack of competence and skills and as a result of which taking internal loan became inevitable.” – said Bakradze.