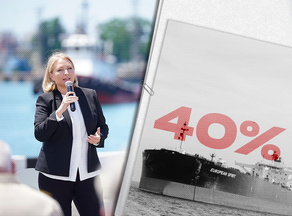 "Georgia's future strength and economic prosperity are linked to the sea. Georgia cares for the sustainable development of its maritime sector, and as a member of the IMO (International Maritime Organization), contributes to the achievement of the goals of the organization. Georgia was one of the 14 maritime countries that responded to the International Maritime Organization and expressed its support for sailors who are the representatives of the key profession and a major force of international navigation," said Natia Turnava, the Minister of Economy and Sustainable Development of Georgia, while congratulating on the World Maritime Day.

The Minister noted that during the pandemic, the world saw the great importance of shipping and people working in the field to create a sustainable future for humanity.

"There are about 14 000 registered sailors in Georgia. The contribution of each sailor to the country's economy is enormous. Sailors bring about GEL 500 million in cash into the country's economy annually and play an important role in the Georgian economy's sustainability. According to 2019 data, Georgia ranked 13th in terms of supply of officers on EU ships. Compared to 2015, in recent years, we have a 40% increase in the employment of Georgian sailors on ships sailing under European flags," Turnava said.

According to the Minister, thanks to the already implemented and ongoing reforms as well as modern infrastructure, the Georgian maritime sector is approaching European standards. Out of 53 countries that recognize Georgian certificates, 19 are members of the European Union.

"Thanks to modern approaches, organization, and coordination, Georgian ports are currently operating at full capacity and are fully involved in the country's supply and the logistics chain of the region as a whole. Reforms and projects implemented in recent years enable Georgia to fulfill its functions and obligations as a maritime country at the international level following the European standards," the Minister said.

Georgia is one of the first countries to respond to the International Maritime Organization (IMO). On June 15 of 2020, the government decided to declare sailor's profession "a key profession" in Georgia.