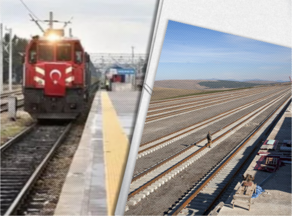 Cargo transportation to China through Baku-Tbilisi-Kars Railway got carried out for the first time. On December 8, late in the evening, a train arrived in Georgia, departing from the Turkish city of Istanbul on December 4; the Ministry of Economy shares the information.

According to the agency, the cargo was directed from China to Europe using the middle transport corridor until now.

"The train that should arrive at the Chinese province Xi'an via the middle corridor (which includes the Baku-Tbilisi-Kars railway crossing) will cover 8,693 kilometers in 12 days. This railway line has been operating in test mode since 2017. The corridor is distinguished not only by its geographical location but also by the developed infrastructure and institutional system. However, the development of the corridor does not mean only the arrangement of infrastructure - it must be accompanied by simplified and digitized customs and border crossing procedures, which is our absolute advantage. Added to this is the potential for diversification of the supply chain in Georgia, which is reflected in the existence of sea, land, and rail links with neighboring countries. At the same time, work has begun on the issues of digitization of transport systems within the country (including ports) and, at the same time, the transport corridor. The projects mentioned above and activities are important to increase the competitiveness of the transport corridors to Georgia," the Ministry of Economy and Sustainable Development explained.