From Gori to Berlin with 1 Sewing Machine 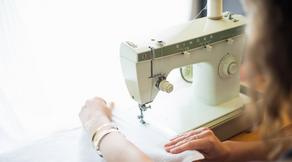 The Georgian sewing company NOA was presented at the Berlin Fashion Week. Mariam Papitashvili, Georgian designer and entrepreneur told Report.ge that she tried to showcase the Georgian individual line, femininity and traditional Georgian features at the exhibition.

The entrepreneur develops a line for 40+ women and has a sports line for younger generation, she also prepares accessories and wants to add a shoe line to her brand. For now NOA only operates online and has a small showroom in Gori. Everything started 5 years ago with just one sewing machine. Mariam Papitashvili told Report.ge that designing and owning her own model atelier was her childhood dream. The initial capital was $ 1,000 that was borrowed from her parents when she was 19 years old. The young startuper decided to take a chance on the Crystal Foundation and USAID's Yes Georgia project and became a student at the School of Entrepreneurs after a successful job interview.

The entrepreneur is not thinking about export yet. Her 1-year plan is to conquer the local market.

The School of Young Entrepreneurs was established in 2016 in the framework of Crystal Foundation and USAID's Yes Georgia project. A total of 574 students graduated from the school last year. The business project was presented by 225 graduates out of which 55 received co-funding like Mariam.  The program is funded by the United States Agency for International Development (USAID).