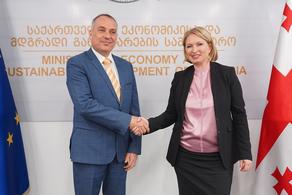 Georgia's Minister of Economy and Sustainable Development Natia Turnava has met with the new Israeli Ambassador to Georgia, Ran Gidor.

The parties emphasized the trade-economic relations between the countries, as well as the field of cooperation in the future.

The parties noted that Georgia and Israel have successfully developed intense collaboration in economy, agriculture, culture, and education.

When referring to bilateral trade, the Georgian Minister of Economy stated that the conclusion of a free trade deal between Georgia and Israel would be an essential step forward. Thus, the timely launch of talks will bring the economic relations of the two countries at a new level.

The collaboration in investments, innovations, transport, and tourism fields were also highlighted. The parties noted that Israel ranks seventh among the top 15 countries having most visitors in Georgia.

The parties said that the direct flights between Georgia and Israel supported the growth of tourists' flows.