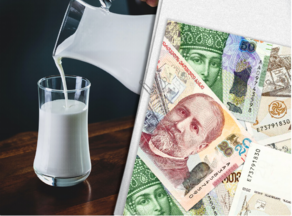 During eight months of the current year, Georgia exported 64 tons of butter to Azerbaijan, amounting to $ 3 840.0. Export under trademark 0405 got carried out in all months except January and June by road.

During the same period, Georgia exported 2.9 tons of cheese and cottage cheese worth $ 17.8 thousand under the trademark 0406.

In January-August of the current year, 0.2 tons of buttermilk, kefir, and yogurt worth 0.7 thousand dollars were put for sale under the 0403 trademark in the neighboring country.

Georgia sold 643.1 tons of dairy products to Azerbaijan this year.

The transit of products got carried out entirely by road.

As for the export of milk and cream, this product exported to Azerbaijan under the trademark 0402 in January, and was less than a ton, less than a thousand dollars in monetary terms, which is why it is not reflected on the National Statistics Office of Georgia foreign trade portal.