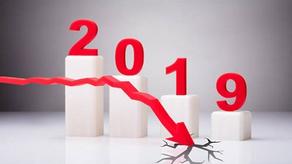 International economists believe that the global financial crisis will hit the world next year. Valery Chechelashvili, an International Economic Expert and the Rondeli Foundation Economic Analyst told Report.ge that it is most probably that the crisis started in Asia, China in particular.

Europe is already affected by the pause in China's economic growth. China is a major client of German industrial cars and equipment. Industrial goods are the basis of exports to the most developed EU countries. There is a much more unstable situation in the UK that cannot decide how to exit the European Union. Based on these facts specialists speculate that Europe could become the epicenter of the crisis.

Specialists think that US is in danger of crisis as well. American companies are also suffering from the Trump’s trade wars. The crisis could also be caused by rise on oil prices which we saw in 2008. Increasing oil prices could worsen already tense relations between Iran and Saudi Arabia.

Report.ge tried to figure out whether Georgia is ready to stand the global economic crisis with minimal loss. According to Valeri Chechelashvili Georgia is sensitive towards world economic crisis. Since we are an import dependent country we will not be able to avoid a negative resonance in our economy.

Experts praise the tourism development but according to them as soon as external factors worsen this trend will also collapse. Valeri Chechelashvili also focuses on immigrants and says that as soon as foreign factors worsen hundreds of thousands of Georgians working abroad will face problems and cash flow to Georgia will decrease. This will create problems for the national currency.

It turned out that Georgia will not get  financial support in case of the crisis. However, the Expert also says that the country has the resources to overcome this crisis with relatively minimal losses. This requires right economic policy and reasonable solutions the shortage of which according to Chechelashvili is obvious.