Has the excise tax plan failed? 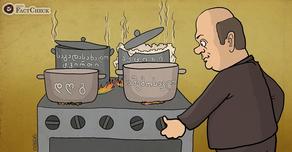 "The excise tax rate was set at GEL 1 287.0 million, which is GEL 175 million less than the approved plan for 2019", reads Georgian Law on Amendments to the State Budget of 2019 uploaded on the Parliament's website.

"This type of tax was caused by the change in the structure of tobacco use during 2019", the explanatory note reads.

According to the Ministry of Finance total state budget revenue for 2019 is set at GEL 10 540.4 million, which is GEL 52.7 million more than in the approved plan.
Tax revenue remains unchanged at GEL 9 645.0 million, but shows significantly adjusted composition: Income tax forecast is GEL 3 150.0 million (reduced by GEL 16 million).
The reduction in income tax forecasts is mainly due to the introduction of the pension scheme and more people than planned in the system.
The projected profit tax rate was set at GEL 855.0 million, which is GEL 74 million higher than the approved figure. Additional income received through this type of tax is due to the higher distribution of taxpayers earnings than projected.

Value added tax forecast was GEL 4 071.0 million compared to the initially planned GEL 35 million for 2019. The income dynamics of this type of taxation are mainly due to improved tax administration.

The forecasted rate of import tax was GEL 75.0 million, which is GEL 8 million lower than the original plan. The updated plan reflects current import trends, which are affected by free trade agreements.

The projected rate of other taxes set at GEL 207.0 million is GEL 90 million higher than planned.

Other  forecasted revenue are projected to grow by GEL 45 million which is GEL 505.0 million in total, with interest and sanctions / penalties as well as a dividends planned by the National Bank of Georgia.