Rovnag Abdullayev: Friendship between Azerbaijan and Georgia is at an unprecedented level 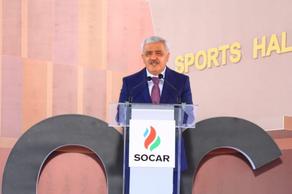 SOCAR President Rovnag Abdullayev opened a new sports complex in the village of Kizilajlo, Marneuli. Speaking at the event, he said that the friendship between the governments of Georgia and Azerbaijan is at an unprecedented level. According to him, the countries are connected by joint efforts and cooperation in strategic and other factors.

Rovnag Abdullayev also spoke about the gasification of villages. According to him, gasification in Georgia has already been increased to 90%, which is a merit of Azerbaijani investment. The country has invested a billion of 200 thousand in the project.

"The project, which was built with the government's support in Kizilajlo, started a year ago with joint cooperation. We worked together, and the result was achieved. Also, there was a joint project in Lagodekhi; a kindergarten was built, many other projects were implemented, schools and other social programs that we were able to implement successfully. The sports teacher told me that many renowned athletes have grown up in this village; I am sure this gym will raise many Olympic champions. The Olympics have just ended. I'm a very athletic person, and I used to watch the Olympics. It was gratifying that Georgian athletes performed very well at the Olympics and achieved good results. I was just as happy as the Georgian nation was happy with their success," Rovnag Abdullayev said.