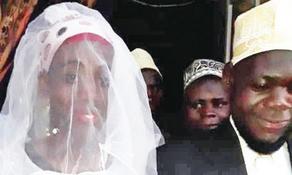 Sheikh Mutumba told the Police that he met Tumushabe at Kyampisi Mosque and proposed to marry ‘her’, which ‘she’ accepted. Mutumba said when he made sexual advances, ‘Nabukeera’ declined, saying ‘she’ would only accept intimacy after ‘she’ introduced him to ‘her’ parents.

Mutumba had married Richard Tumushabe, who was masquerading as a female known by residents as Shabullah Nabukeera at a nikah (Muslim wedding) two weeks ago.

“We visited ‘her’ aunt, Nuuru Nabukeera, a resident of Kituula village in Sseeta Namuganga subcounty, Mukono district, where I paid bride price including two bags of sugar, two goats, a Quran, clothes,” Mutumba told the Police.

The discovery of Tumushabe’s gender happened after a neighbour reported him to the Police over accusations of theft of household property — a television set, clothes and sh300,000 from his room.

The neighbour told the Police that ‘Nabukeera’ (Tumushabe) jumped over an incomplete perimeter wall and stole the property.

The Kayunga district criminal investigations officer, Isaac Mugera, said at the time of arrest, Tumushabe was clad in a hijab (veil), adding that it was hard for one to tell that he was a man.

“Upon arrest, the suspect was examined by our female officer before she could be taken to the women’s cells. The officer was shocked to discover that the female suspect she was taking to the cells was a man. He had stuffed clothes in the chest, which made it to look like he had breasts,” Mugera said.

On being quizzed, Nabukeera revealed his true name as Richard Tumushabe, a resident of Kyampisi village in Kayunga sub-county. He said he had been masquerading as a woman with the intention of getting money from men.