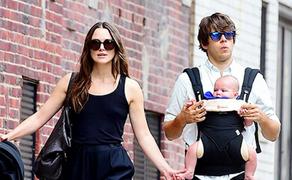 The Pride and Prejudice actress, 34, welcomed baby Delilah with her husband James Righton.

Delilah's got a big sister in the couple's first child, the adorable 4 year-old Edie.

Keira announced the name in a candid interview with The Daily Telegraph, where she also said that she had planned to take six months' maternity leave.