Convicted Russian spies may be involved in Khangoshvili's murder

Convicted Russian spies may be involved in Khangoshvili's murder 7 December, 2019  00:41 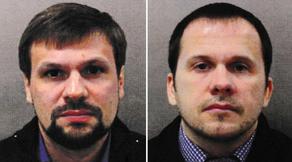 The German newspaper Der Spiegel reports that the country's Prosecutor's Office has launched the investigation into the case of famous Russian spies known as Alexander Petrov and Ruslan Bashirov. The Prosecutor's Office supposes that Petrov and Bashirov may be involved in Zelimkhan Khangoshvili's murder. Both of them were involved in the poisoning of Sergey and Yulia Skripal in March 2018.

As per released information, the passport of an individual detained over Khangoshvili's murder has characteristics similar to those of Bashirov's and Petrov's passports. Both of them were in Germany in 2015.

Alexander Petrov and Ruslan Bashirov prove to be organizers of the poisoning of Sergey and Yulia Skripal, and both are GRU agents, according to British law enforcers.

On Dec 3, The Office of the German Federal Public Prosecutor accused Russian special services of murdering Khangoshvili, and the prosecutor claimed that murder was perpetrated following the order of the national agencies of Russia or Chechnya, with them having sufficient evidence at hand to prove this.

Following this, The Government of Germany declared two employees at Russian Embassy as persona non grata and forced them out of the country.

Earlier, The Walt Street Journal wrote that Khangoshvili's assassination may have resulted in Germany's move to levy sanctions against Russia.

Steps taken by Germany sparked a strong reaction by Russia, with Press Secretary for the President of Russia Dmitry Peskov calling accusations against Russia baseless. The  Ambassador of Russia to Germany also rejected the accusations.

It is noteworthy that according to the existing information, the meeting between Vladimir Putin and Angela Merkel is set to be held on Monday in Paris within the framework of bilateral negotiations.

Zelimkhan Khangoshvili,40,was killed in Berlin on Aug 23 by a gunshot wound to his head; his body was later transported to Georgia and buried in the Pankisi gorge. His relatives blame the Russian special services for his death.

Khargoshvili has proven to be murdered by Vadim Krasikov, with his identity having been determined through journalistic investigation held by Bellingcat together with Spiegel, The Insider and Dossier Center.