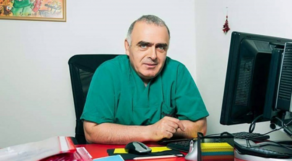 According to the so-called de facto South Ossetia State Security Service, Vazha Gaprindashvili, a Georgian doctor, was actively involved in the 2008 war and served as a captain in the Georgian Armed Forces Medical Service.

“Georgian citizen, a resident of Tbilisi, Vazha Gaprindashvili violated a section of the state border between South Ossetia and Georgia, near the village of Orchosani on November 9”, the de facto KGB stated.