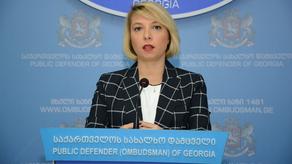 Giorgi Mamaladze is starving in prison. According to Mikheil Ramishvili, the lawyer of the accused Deacon Giorgi Mamaladze, he will be starving until meeting the Public Defender.

After leaving the penitentiary, Ramishvili stated that the health condition of the Deacon was critical; the prisoner lying on the stretcher and could not walk on his own. Ramishvili publicly addressed the Public Defender to visit Mamaladze.