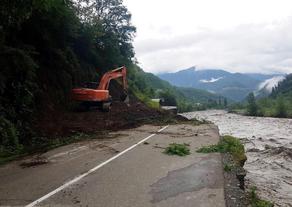 According to the MP’s information, the electricity supply is restored in ten villages.

“Starting from July 29, 447 citizens were evacuated from the disaster area, and 21 were returned to their homes. Doctors were transported to the villages of Glola, Khideshlebi, Majieti, and Chiora based on their needs.

Four villages remain without electricity (Glolam Shovi, Chiora, and Ghebi). The restoration works are in the process.

The disaster damaged the automobile road leading to 16 villages. According to current information, the road to eleven villages is restored, the works to restore the road to five more villages are intensively continued.

The created Disaster Emergency Unit is on permanent contact with the affected communities and provides required assistance.

The population is supplied with food and the items of the first necessity.” – the information reads.

For your information: the Rioni river ran out of its borders and flooded 12 villages, cutting them from the rest of the Oni Municipality.