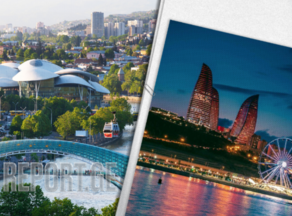 "The project on a joint tourist package, which will cover Georgia and Azerbaijan, is now ready," said the Georgian Ambassador to Azerbaijan Zurab Pataradze. According to him, the package is intended for foreigners preparing for a trip to the Caucasus. Visitors will have the opportunity to get acquainted with the history, culture, traditions, nature, and cuisine of both Georgia and Azerbaijan within one trip. According to Pataridze, new tourist routes are being developed between the tourism departments of the two countries.

"The routes cover not only Baku and Tbilisi but all regions of both countries. In my opinion, this is a very interesting project. Certain results have already been achieved," said Georgian Ambassador to Azerbaijan.

Report.ge tried to find out the details in the Azerbaijan Tourism Showroom in Tbilisi. As the showroom manager, Mariam Natadze said, the work on Georgia-Azerbaijan tourism packages has been resumed.

"The summer season is starting, and we will maximize the offer of joint tour packages. Readiness for this is evident from both countries. We are sure that there will be a demand for tours like this. For our part, we try to make the prices as attractive and affordable as possible for all social groups," Mariam Natadze told report.ge.

When asked by report.ge, if such joint packages are a proven method in world tourism, Natadze replied that the initiative is not exclusive, although such packages are not so frequent.

"As far as I know, there are not many joint tour packages in Europe. They promote one country at a time. I know from the Finns who came here and saw several countries in Europe in one tour, though they organized it themselves. It should be noted that there is a showroom on one of the largest and most famous, most touristy streets in Tbilisi, whose task is to transport Georgian guests to Azerbaijan," Mariam Natadze told report.ge.