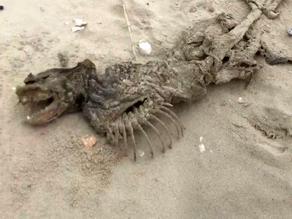 Erica Konstantini was walking on the beach when she noticed that the dog found bones in the sand. Erica filmed the parts and placed them on the internet seeking help to define the found animal’s identity.

The video caused huge resonance. According to a part of the internet users, it could be lynx’ bones, but it should be mentioned that the creature misses the eyes. Based on one of the most popular speculations, the remnants belong to a mythological creature, Chucapabra.