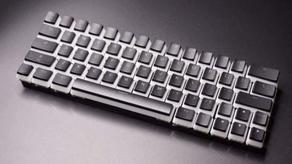 Typing large text on a keyboard takes a lot of time and concentration, so startup CharaChorder has created a keyboard that makes writing three times faster. A new invention has already been launched on the crowdfunding website Kickstarter, Newatlass reports.

The innovative keyboard costs $ 299. According to its creators, the keyboard will write a word with a combination of only one or several letters.

"We think in words and not in letters, then why should we write in letters?" the creators of the keyboard said.

An innovation called CharaChorder Lite is visually similar to a regular keyboard and can be used in the traditional way; however, the main distinguishing feature is that if, for example, the user presses several keys at once, the whole word will be displayed on the screen immediately. Of course, it is impossible to write all the words this way, but the printing process will be much faster when writing the most commonly used words.

The device will be compatible with operating systems - Mac, Windows, iOS, Android, and Linux.