"He swore and threatened my children" -- Okhanashvili on his assaulter 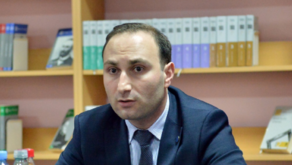 The Chairman of the Legal Issues Committee Anri Okhanashvili has elaborated upon a recently occurred incident in Bakuriani. In his words, the man who assaulted him was extremely aggressive.

"After the children had finished skiing, we entered the nearby cafe, and my spouse noticed a man who was looking at us in an extremely aggressive manner. I asked my wife not to pay attention to him. However, the man kept staring at us and repeatedly walked near our table. Then he went out and returned after a few minutes. Staring at us again, he took his seat at a table next to us. He started at us, used demeaning swear words and insulted my family members and my children because of me and my political activity. He also threatened my children," Okhanashvili said and added that he did everything in his power to avoid physical confrontation with the man picking a fight. "First, I took the children away. Some people even left the cafe as the man was immensely aggressive. He was extremely abusive, swore loudly, and some cafe visitors attempted to stop him. Eventually, he was detained," Okhanashvili declared.

Anri Okhanashvili has already given his testimony to law enforcers.

The incident took place on 14 January. Vakhtang Robakidze was reportedly detained for verbally and physically abusing MP Okhanashvili at a cafe in Bakuriani, where he was together with his family.

The investigation is in progress under article 151 of the Criminal Code of Georgia, envisaging threats of death or bodily injury.

Vakhtang Robakidze has been sentenced to three days in jail for resisting police officers.