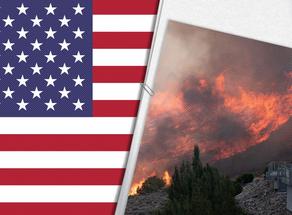 There are 4 400 firefighters involved in fighting the Caldor fire in the United States, California. The president of the country, Joseph Biden, wrote on Twitter.

Biden said the fire burned more than 80 000 acres of land.

The head of the White House also noted that he declared a state of emergency in California yesterday.

All national parks in California were closed to visitors because of the danger.

As you know, thousands of people were evacuated in California this year due to the rapid spread of fires.