Passenger train goes off the rails in India 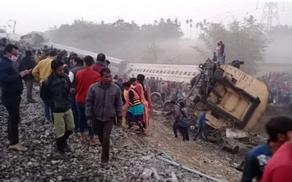 The death toll from the train going off the rails in eastern India has risen to at least nine people. About 45 people were injured, 10 of them in critical condition. The information is spread by NDTV based on the local government.

In the state of West Bengal in East India, near the town of Minaguri, at least 12 carriages of a passenger train went off the rails. The causes of the disaster are unknown at this time. An investigation is underway.

A rescue operation is ongoing at the scene. It is not ruled out that there may be dead people in the carriages.