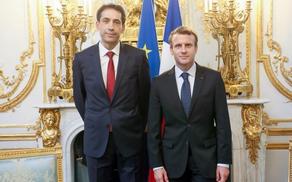 Azerbaijan's Ambassador to France Rahman Mustafayev has responded to French leader Emmanuel Macron, who tweeted: "We will fight together. Be certain of this."

The Azerbaijani ambassador shared Macron's tweet and responded to him: "Thank you, Mr. President! Azerbaijan and France have fought and will fight against separatism and aggressive policy."